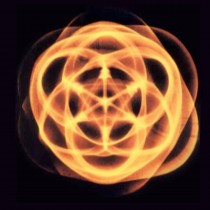 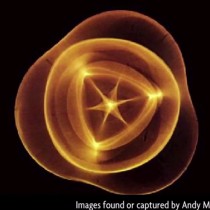 The relation between vibration and geometry is beautifully described by the work of Swiss medical doctor and natural scientist Hans Jenny (1904-1972) in a science called Cymatics.

Buckminster Fuller
The late Buckminster Fuller (1895- 1983) however was the first to discover that a relation between musical frequencies (The Diatonic scale) and geometrical forms exists. He used a balloon submerged in blue dye and vibrated it with frequencies from the musical scale (the 7 white keys from the piano): as a result of wave interference, marvellous two dimensional arrangements appeared on its surface. 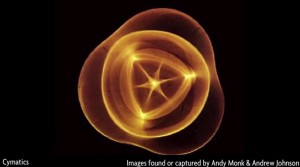 Hans Jenny
Dr. Hans Jenny carried on the work of Buckminster Fuller and tested these standing wave vibrations in spherical volumes of fluid. Much to his surprise all of the Platonic solids, named after the legendary philosopher Plato, showed up as geometrical patterns. What you see in the picture above is a star-tetrahedron; it is also on the cover of this book! If you examine the picture carefully you may have noticed the two equilateral triangles, one facing up and one facing down. Together they form a symbol that is known as the Jewish Star of David, but remember in 3D reality the two triangles are tetrahedrons, three sided pyramids.